There’s nothing Hilary MacLeod won’t do to promote her books!

Today’s guest blog is by my pal, Hilary MacLeod, author of Revenge of the Lobster Lover, Mind over Mussels, and All is Clam.  (She’s currently working on Something Fishy.)

I sense a theme here, with that trained legal mind of mine. Hilary will explain how she markets her books. (You can check out her website at www.hilarymacleod.ca)

There’s Nothing I Won’t Do for My Books

Alice Loweecey said it all in “Marketing a Book is a Giant Crap Shoot,” her guest blog on Peggy’s “Getting Published.” [Ed. note: that’s this one!] And Peggy said it all in her recent blog: “What I did to Market my Book in 2012.”

An amazing amount, is what.

I refer any beginning writer to these two blogs, to underline that writing is far, very far, from the only task an author has. For me it’s the most fun.  I assume that for most writers that’s the case.  They are not writers because they seek a career in marketing and sales, but it’s part of the job, a big part of the job.

You can’t be a shrinking violet.

I often say:  “There’s nothing I won’t do for my books.”  I think it every time I approach a shopper at a book signing, write an email seeking a media interview, or, like Alice, put on my “author hat.”  In this case it’s a lobster fascinator, coupled with a creepy pair of glasses.  Visual proof that I’ll do just about anything for my books. 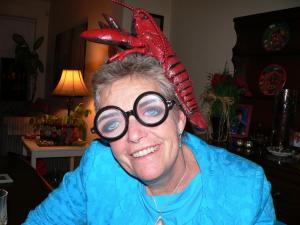 A book has only one author, but that author must be many people.

In my neighbourhood, there’s one big chain bookstore and two independents.  In the fall of last year, when I was launching my latest mystery, All is Clam, I didn’t know that the big chain store – where my debut novel had landed up on the “Books of the Year” table – didn’t have my third book.

I found out, because, like many writers, I went sniffing around the store, anxious to see my book finally on the mystery shelves.  The previous two had been in “Local Interest.”  Go figure.  I went to the mystery section, but All is Clam wasn’t there.  I checked the computer.  It said there were none in stock at this store, but it was available at other stores.  If it wasn’t available at the big store at the mall in my own town, what hope did it have?

I called my publisher, who called the chain store, to find out there was a new manager of the mystery section, who didn’t know my books, didn’t know I was local, didn’t know that the books had sold well (and sold out more than once).  Problem solved.  It worries me that I can’t snoop around in every town.

I became even more concerned when I checked on one of the two independents. My first book had sold well for them, but they had never stocked my second book and they didn’t have my third.

I don’t like to approach people, pushing my agenda.  It’s difficult for me, but there’s nothing I won’t do for my books. I asked the manager why they didn’t stock them.  The answer:  it cost too much to ship them from eastern Canada, where I’m published.  She offered to take them on consignment.  I have provided them with multiple copies of all three books.  They very nearly – and very quickly — sold out of the entire order.

In this case, I was the author, the supplier, the shipper, the stocker, and the accountant required to keep track of supply, sales and invoice the store.  And hope I get paid for books I purchased from the publisher, and for which I am so far out of pocket.  For filling all these functions, I get the usual 10% of the retail price.

That’s two horror stories from two out of the three local bookstores.  What, I wonder, is happening in other towns?

I have a great publisher, who stands behind me and treats me at least as well as many bigger outfits.  I have two launches for each book: one, in Prince Edward Island, the setting of my series; the other in Ontario, where I live.  I’m encouraged to take an author tour with each book and the expenses are covered.

But the reality of the business today is that if you want to be a writer, you better be prepared to be a marketer.  Or you’ll disappear in the buzz around others.

Gone are the days when I used to be on the interviewing end of things.  McLelland and Stewart’s ladylike sales rep would usher into our Montreal radio station Pierre Berton, Maragaret Atwood, W.O. Mitchell and lesser-known writers for their interviews.  They’d be taken around the city, given a lunch in some lovely restaurant, and not have to deal with the business of selling.

But the author tour in the grand style hardly exists anymore.  You’re the only one who really cares about your book, and you should be prepared to roll up your sleeves and do the work.

There should be nothing you won’t do for your book.  If you won’t, who will?

This entry was posted in Marketing and tagged All is Clam, marketing, Mind over Mussels, Revenge of the Lobster Lover, what an author has to do to market books. Bookmark the permalink.